The Stevenson-Hamilton award is offered biennially by the ZSSA Council in the form of a citation, medal, and certificate to an amateur Zoologist for exceptional contribution(s) to Zoology.

It could be awarded to any non-professional Zoologist. Candidates are proposed and seconded by members of the Society. Should more than three nominations be received, a subcommittee consisting of the President, Vice-President and Honorary Secretary will narrow down the number of nominees to three. These will then be tabled at a Council meeting for a decision by ballot. The award shall be made at the banquet dinner during the annual conference. Council shall have the power to hold over the award if suitable candidates are not forthcoming. 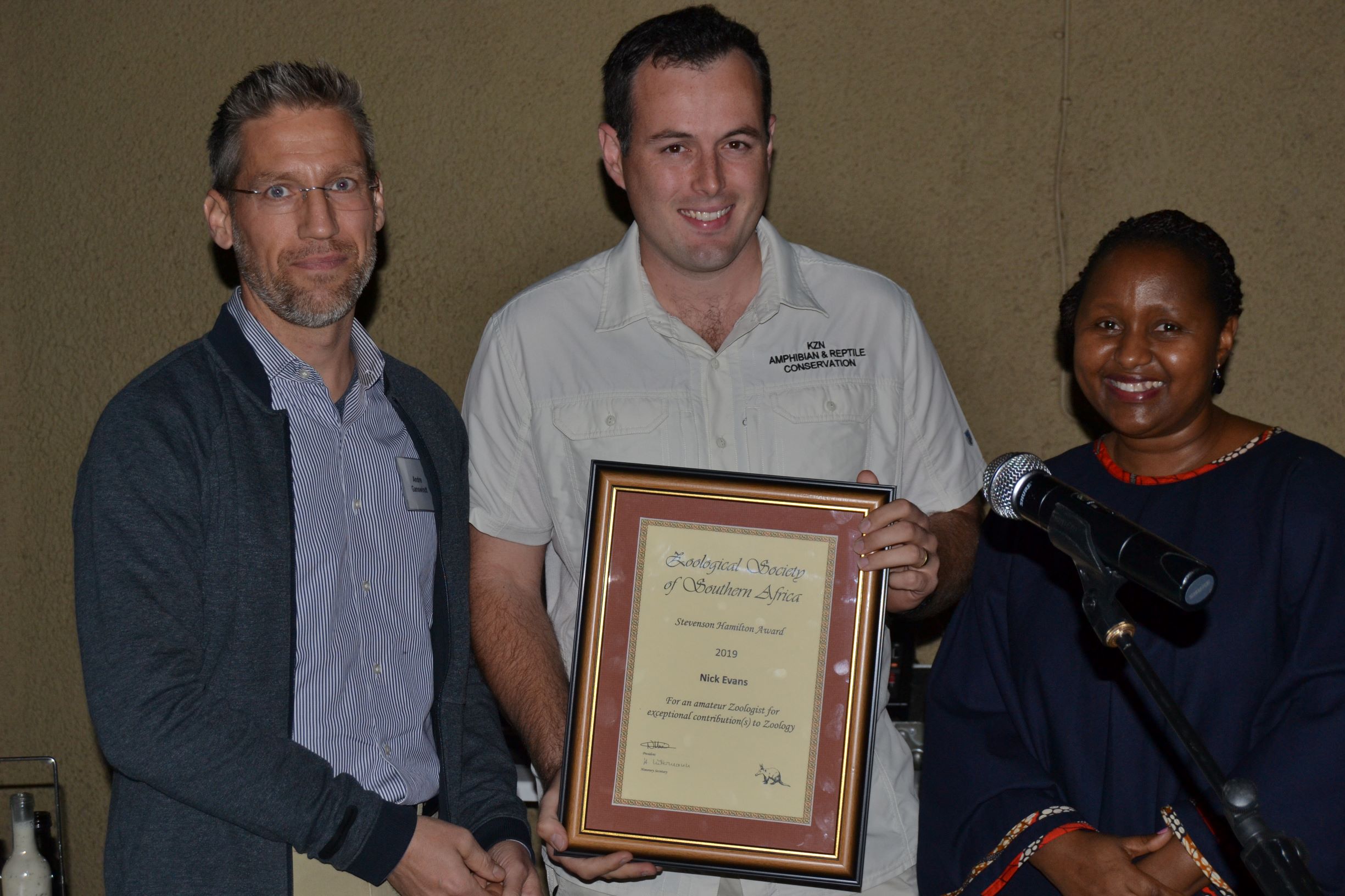 Before beginning his own NGO, Nick Evans has worked for a variety of zoological institutions, such as WESSA, the Endangered Wildlife Trust (EWT) and PheZulu Safari Park. His career began at the reptile exhibit (dangerous creature) of uShaka marine world Durban, under the guidance of senior herpetology curator Carl Scholms. Nick is the founder of KwaZulu-Natal Amphibian & Reptile Conservation (https://www.kznamphibianreptileconservation.com/) which was founded by Nick in 2015, as a chapter of The Lawrence Anthony Earth Organization. The aim of the programme is to create an awareness and understanding about the diversity of herpetofauna that inhabits Durban and its surrounding areas. His goal also is to protect Durban’s herpetofauna and educating the people of the greater Durban area to co-exist with reptiles and amphibians.

Nick has a very large and supportive fan base from children to adults via his social media (which he keeps regularly updated with posts of information and excellent photography) throughout KZN.

Beyond secondary school Nick has no formal/academic education, Nick is completely self-taught via his own reading and regularly consulting with colleagues in the academic arena. With his own commitment to learning outside of a formal setting, Nick’s taxonomic skills of southern African herpetofauna (and birds) is of a very senior level.

In recent years Nick has been collaborating on various herpetological research projects and will be co-author on publications emanating from this research. Most of these are currently in the data collection and draft phase. Nick regularly writes and is regularly interviewed in local print and radio media in Durban furthering the awareness of how to co-exist with Durban’s snakes. These local media outlets include (but are not exclusive to) Highway Mail which is a publication where Nick had a regular column for a time and Queensburgh News, Daily News, North Coast courier, Saturday Independent and the Sunday Tribune have all interviewed Nick and published his work. Nick this year has also published a book of memoirs “Life of a snake rescuer” which is being very well received and is a big achievement for a young aspiring conservationist.