The Gold Medal award is presented biennially by the ZSSA Council for outstanding achievements in Zoology in Southern Africa over a number of years.  Such achievements need not necessarily be limited to research results. Candidates are proposed and seconded by members of the Society.  Should more than three nominations be received, a subcommittee consisting of the President, Vice-President and Honorary Secretary will narrow down the number of nominees to three. These will then be tabled at a Council meeting for a decision by ballot. The award is made at the banquet dinner during the biennially Conference. The ZSSA Council may hold over the award if suitable candidates are not nominated.

Nominations proposed and seconded by two members must be accompanied by a citation, listing the candidate's achievements and should include complete curriculum vitae. Nominations should be emailed to the secretary Dr Heike Luthermann (hlutermann@zoology.up.ac.za; cc elma@mweb.co.za) 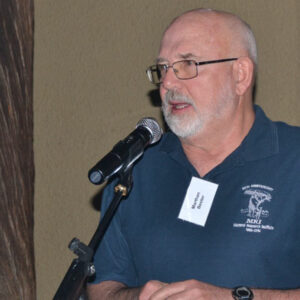 Marthán Nieuwoudt Bester has been instrumental in the continuing presence of scientific researchers in the South African Subantarctic. Marthán’s lifelong dedication to marine mammal conservation and research in the Southern Ocean and Antarctica is evidenced in his impressive publication record, supervision of students, capacity building of conservationists, field workers, students and colleagues. His diplomacy in policy and management, alongside scientific excellence has resulted in continuation of long-term research programmes through turbulent times in South Africa’s history. He has promoted Antarctic awareness and research not only to his students and colleagues, but to thousands of undergraduates, schoolchildren and the public through publications, lectures and radio/ television appearances.

Marthán’s early work (1970’s) on morphology, biology and ecology of Subantarctic fur seals Arctocephalus tropicalis, remains fundamental work to date. He completed his DSc at the University of Pretoria (UP) in 1978. At UP (associated with Department of Transport - later Environmental Affairs) he became a Biologist undertaking 6-13 month expeditions to Gough and Marion islands (1974-1978), and Kerguelen and Marion Islands (1979-1982). He accompanied multinational expeditions to Southern Ocean islands (e.g. Heard, King George, Amsterdam islands) and Antarctica as researcher, and facilitated student involvement in international research expeditions to Bouvetoya, Macquarie Island and Antarctica. Between 1982-1996 he became Antarctic Research Officer (Mammals) to the Department of Environmental Affairs. During the period 1997–2002 he was promoted from Lecturer to Full Professor (2002–present) at UP. He has supervised 38 MSc, 13 PhD’s, 10 Postdoctoral fellowships to completion; with 3 MSc in progress, and continues to collaborate with leading academics from every continent (despite being retired).

His foremost scientific legacy: He conceived, initiated, maintained and managed (uninterrupted from 1983-2013) the intensive Marion Island southern elephant seal mark-recapture research endeavour. This programme stands as one of the longest running and most important large mammal datasets in existence globally and the foremost of its kind for the species. His research activities have led to the generation of >223 peer reviewed publications, as well as numerous (>100) technical reports, policy documents, book chapters, protocols and other literature authored and co-authored by MNB. His H-factor is 30: ISI Web of Science (31 July 2018), and his work has been cited >3000 times. Thomson Reuters ISI Essential Science Indicator 2013: MNB was listed in top 1% of researchers globally for Animal and Plant Sciences. He has been awarded five Outstanding Academic Achiever awards by UP and an honorary award for the feral cat eradication effort on Marion Island, by the DST Centre of Excellent for Invasion Biology, Stellenbosch University. His further recognition includes, amongst others being scientific advisor to RSA government sub-directorate on Antarctica and Islands, and a member of various national management and advisory groups and committees related to Antarctica and Prince Edward Islands (1984-2016). He served as a full member of SCAR (Scientific Committee for Antarctic Research) Group of Specialists on Seals (GSS) (1984-2002); a founding member of the Antarctic Pack Ice Seals (APIS) steering committee of SCAR (1994-2002); Secretary of GSS and then revamped Expert Group on Seals (EGS) of SCAR (2000-2006); chair of the EGS (2006-2008), and is currently an Honorary conservation officer for the Government of Tristan da Cunha. He serves on editorial boards of Marine Ecology Progress Series, Polar Biology, and African Journal of Wildlife Research; has reviewed for ~50 internationally accredited journals, and has served as external evaluator on >70 dissertations/ theses, and grant - and peer review panels.

In addition to his achievements in the field of marine mammalogy, he led the programme which successfully eradicated feral cats from Marion Island. This work involved a commitment which lasted two decades (1972-1992), was (and remains) the largest successful island eradication of feral cats in history and has resulted in the recovery of the avian biodiversity on the island. He enabled >120 South African field assistants/students from a variety of cultural backgrounds to spend expedition years at Marion Island. As a consequence of their expedition research and experience gained, most of these “Sealers” have completed postgraduate degrees, and hold influential positions in research and conservation both nationally and internationally. His achievements are not only a result of his tremendous foresight, but also of dedication and a remarkable capacity for hard work. He is an excellent ambassador for Antarctic research, influential marine mammal scientist and a role model for many. Marthán’s mentoring success has been enhanced by his ability to encourage students and colleagues to look beyond his areas of expertise and he has facilitated this development by providing contacts with his wide global network of colleagues. He has always demonstrated great humility in the high profile world of marine mammal research and is not afraid to admit he does not know everything, and will assist colleagues and students alike to seek answers to their questions. He derives great pleasure in his students advancing their knowledge beyond his own, and provides every opportunity for them to do so. This is a critical attribute in encouraging a new generation of scientists who will look beyond current paradigms. 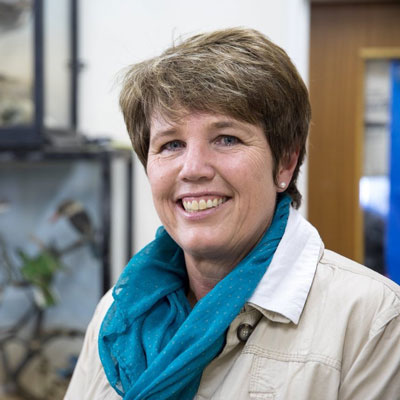 The ZSSA usually awards the Gold medal in recognition of outstanding contributions to the Zoology over an individual’s lifetime during their biennial congress. This year the award was presented to Prof Colleen Downs during the Gala Dinner of the joint ESSA- ZSSA Congress held in Pretoria.

Prof Downs has dedicated much of her research career to understanding how land-use change ecosystems, and how species respond under such conditions (responses may be ecological, physiological etc.). Prof Downs is arguably the most productive female natural scientist in South Africa. She obtained her PhD in 1990 and has published more than 200 peer-reviewed papers since then. She currently averages more than 15 publications per year with more than 20 publications for 2015 alone.

Prof Downs focuses much of her work in KwaZulu-Natal and the Eastern Cape. These areas house some of the most threatened vegetation types in South Africa, and include a variety of species from birds to mammals. Her research, when taken together, provide vital information on how to manage threats and ensure the survival of species, not necessarily to prevent change (including land use), but ensure synergy and survival. One of the strongest aspects of her work is how to manage, and not prevent, change since this is inevitable.

Prof Downs has an exceptionally good record in student training and mentorship and there are very few academics in South Africa that have successfully trained and mentored more young researchers. Importantly, her lab presents a nurturing environment where students, postdoctoral fellows and academics interact in a friendly yet learning manner.

Although much of Prof Down’s work is locally focused, she has a good international standing. She is associated with the DST / NRF Centre of Excellence for Invasion Biology is an Elected Fellow of the International Ornithologists’ Union and has recently been awarded a prestigious DST/NRF South African Research Chair (SARChi). Her incredible contribution to conservation in South Africa was recognized by being nominated for the Mail and Guardian Green Trust Award (1999), and the number of international reviews that she performs. She has co-hosted / organized international meetings. She also routinely review for international journals.